“the ocean… it’s unforgiving…
it’s something you DEEPLY have to respect.” 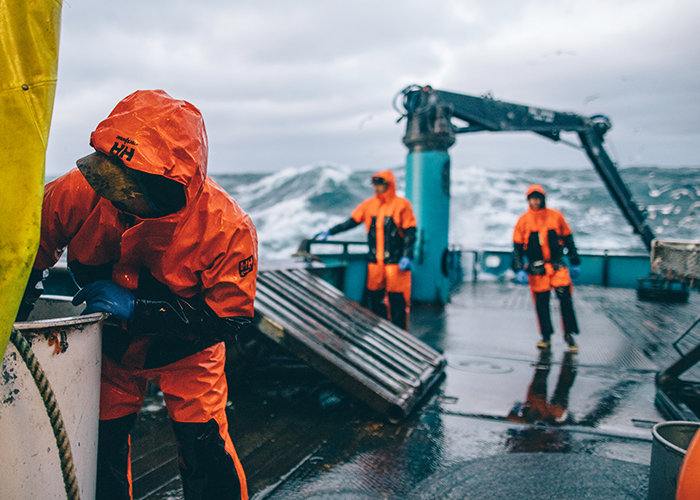 Commercial fishing on the open sea. It’s not the life for just anyone.

Back in 2005, the reality TV show “Deadliest Catch” took the world by storm.

It was a true gale-level force.

The captivating show crashed into the starboard side of American and western pop culture like a 20-ft wave, making its presence known.

It gave the average viewer a look below the deck of the life of commercial crab fishing crews. It revealed what life on the Bering Sea looks and feels like for these hearty souls.

But watching a heavily edited portrayal of a fishing boat on a TV screen from the warmth of your favorite spot on the couch is a far cry from the lived experience of physically being aboard one of these vessels, crafted to survive the extreme. 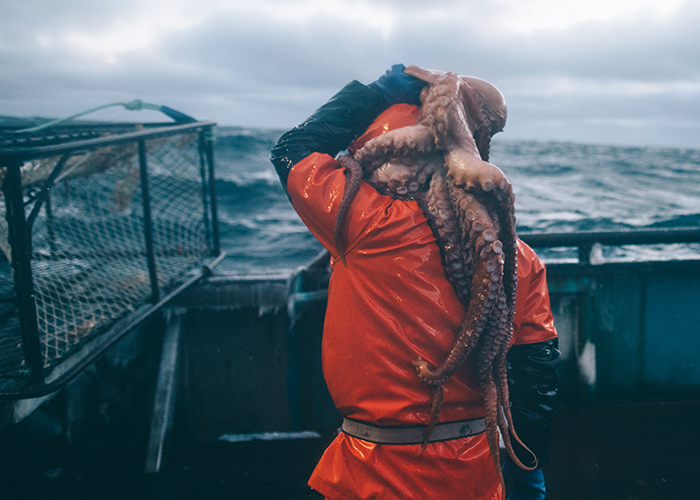 You never know what you may encounter on the Bering Sea. It may not be the kraken or monsters of fairy tale legend, but you will eventually shake the hand of some of the local wildlife. This octopus hitched a ride for a little while, but was slipped back into its big blue home, shortly after.

If you’re crewing a crab fishing vessel in the Bering Sea in the middle of Winter, you are subjected to subfreezing temperatures, blistering winds, jostling and crashing waves, and a constant feeling that you’ve somehow personally offended Njord, Aegir, Poseidon, or some other type of divine being who is unleashing their wet hand of wrath on you, on a regular basis.

So it is not for the faint of heart.

Or the faint of stomach.

Retrieving crab from the depths is no easy task, and it takes a certain type of rugged, steadfast, hearty soul to do this work.

The crew of the F/V Silver Spray, led by Captain Bill Prout, fits that description perfectly.

Captain Prout would rather focus on the tasks at hand than smile for the reality TV cameras.

The crew has enough on their plate to think about.

18-hour work days filled with rigorous manual labor?
Weeks or months at sea, away from the comforts of normal life?
Working all day and night in some of the world’s most adverse weather conditions?
Possibility of losing your life due to the volatility of the sea or other variables?

All part of the package.

And as absolutely real as it gets. 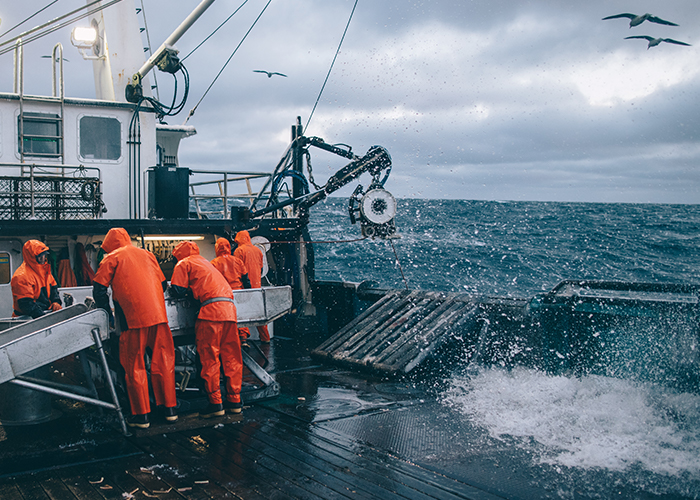 Waves. Wind. Rain. Sleet. Frigid cold. You have to be ready to face it all.

THE BERING SEA: A DEEPER LOOK

Home to over 400 fish species, over 30 seabird species, and hundreds of other mammal species and creatures, the Bering Sea is one of the world’s most fascinating and thriving ecosystems.

The source of approximately $1.6 Billion worth of global commercial fishing enterprise, the Bering Sea is also considered one of the globe’s most important epicenters for several categories of commercial fishing.

The region is regulated by regional authorities who set forth guidelines for sustainable fishing methods in order to protect the normal ebbs and flows of nature. Respect is given and integrated into the commercial fishing of this region so that the annual rhythms can be maintained and so that the region will continue to flourish with its wild inhabitants.

Due to its unrelenting weather, its vast diversity of wildlife below and above the water, and its adrenaline-filled, sea-faring human presence, the region makes for quite the intense and vivid scene, both in real life and on the screen.

You may know it more commonly as the beloved “snow crab.” 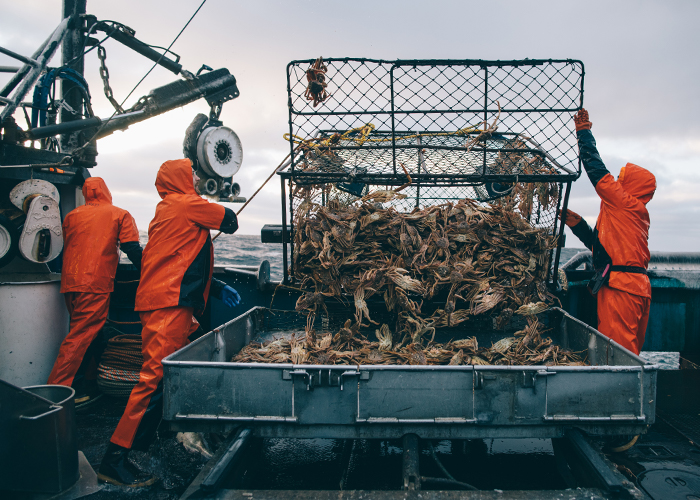 “Snow Crab” is one of the catches of choice for the Silver Spray. It is one of more sustainable species to harvest in the region. 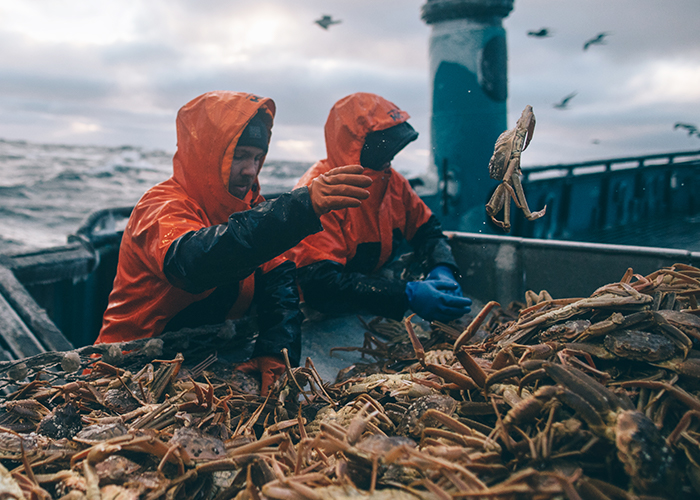 Sorting the haul and complying to regional catch quota guidelines is mandatory, and it allows for annual, sustainable work. In commercial fishing, there is an understanding of how to maximize your current seasonal catch while also considering the state of the future. 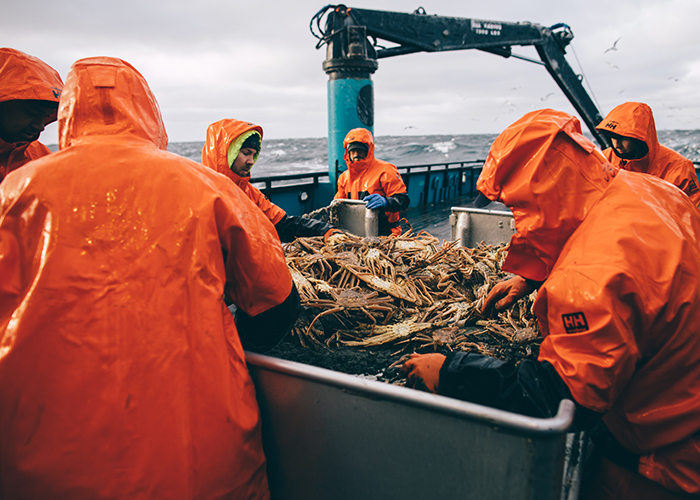 Working on the boat is like working inside a giant rhythmic machine. To get the most out of the day, the team has to work in unison, know their individual roles, and stay dialed into their timings, routines, and consecutive tasks, sometimes for 18 hours straight.

Captain Prout has 40+ years of crab fishing experience, and the Silver Spray has been making crab pot runs for 25 years.

The vessel can hold up to 220,000 pounds of crab at max capacity, before it has to drop the load at the docks to be processed.

Then, it’s back out into the great big blue, to fill ‘er up again. 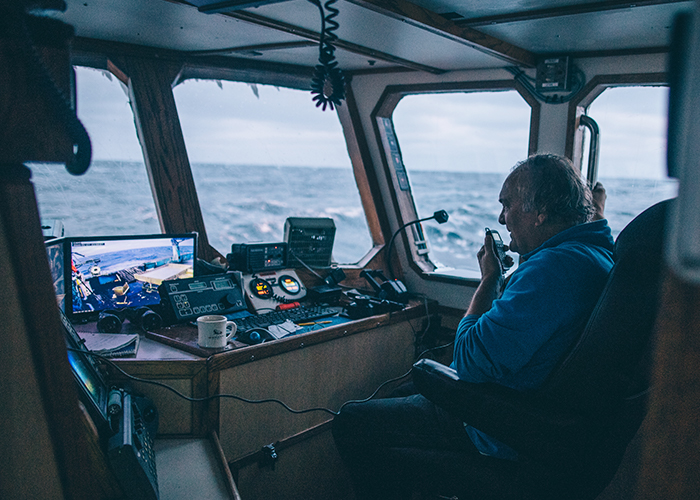 Captain Bill Prout has been at this a long time. He has pretty much seen it all in his time out at sea, and has passed on his work ethic and grit to his three sons, who are a part of the crew.

WATCH: Click play, for a vivid look inside the work happening on a commercial crab fishing vessel in the Bering Sea.

Multiplied over 40 years’ worth of quotas…

Captain Bill has seen a lot of crab.

Turnover in this industry can be decently high, but there are also “lifers”…

It usually it goes one direction or the other… someone may have a quick “in and out” experience with this line of work, or in the case of Prout and his crew, it can be so interwoven into the fabric of your life that it is hard to tell where the fishing ends and where “regular life” begins.

*Please note: HH Workwear is not available in all countries. 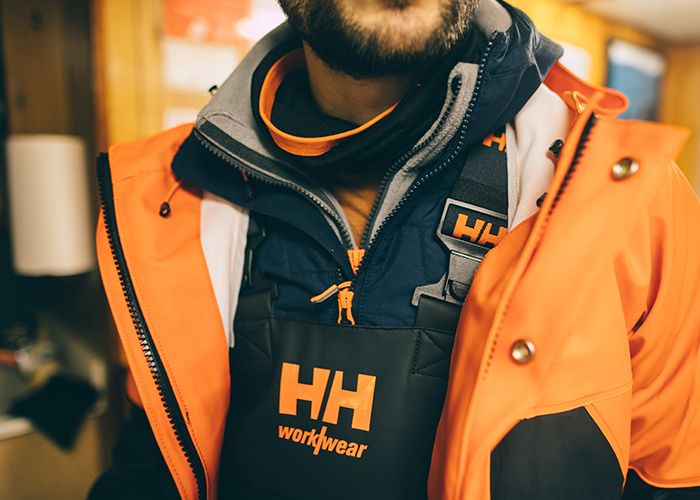 Knowing how to layer effectively is key to being as comfortable, dry, and warm as possible, despite the conditions out on the deck. 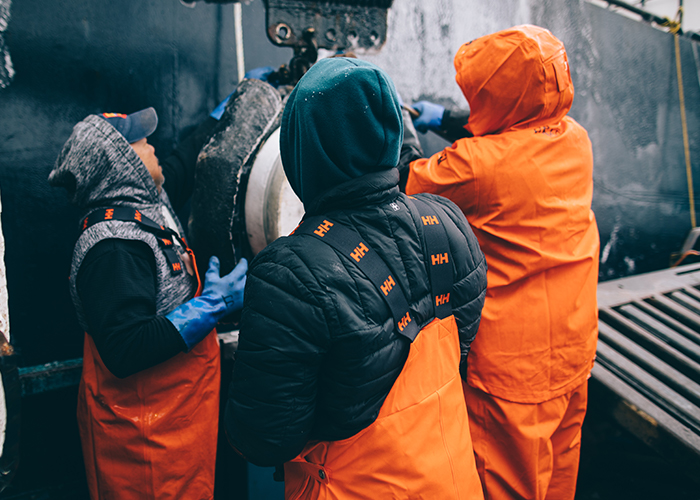 Proper fitting gear, designed for this exact purpose… you can’t beat it. 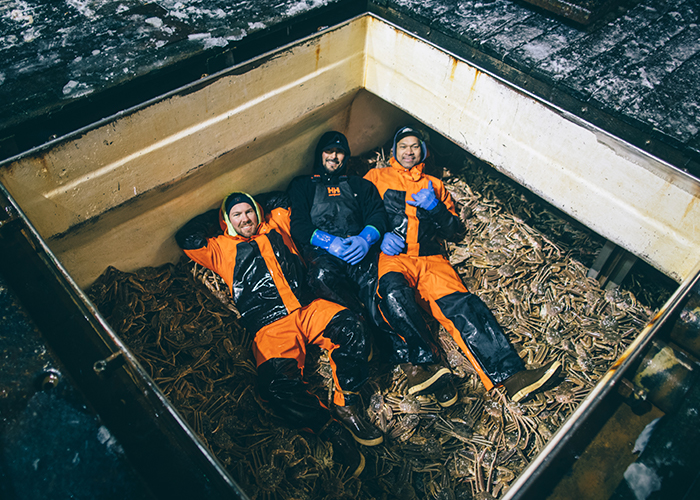 On the Silver Spray, the crew often feels more like family; in some cases, it literally is family. At the end of the day, if the crew is dependable, and the gear is trustworthy, then good things are in store.

PREPARE FOR WHAT YOU CAN’T CONTROL

The weather is always a factor, and it is something that is constantly monitored by the captain and crew.

At night, when the temperatures regularly drop below freezing, the ocean spray can saturate the decks, causing everything to freeze over and gain the appearance of a too-heavily-frosted donut.

It’s vital that the crew monitor the weight of the boat, to keep it balanced and afloat.

Ice weighs a lot, so most nights require a round or two of ice-breaking, and out come the hammers.

Such is the life onboard.

Adapt and do what needs to be done. 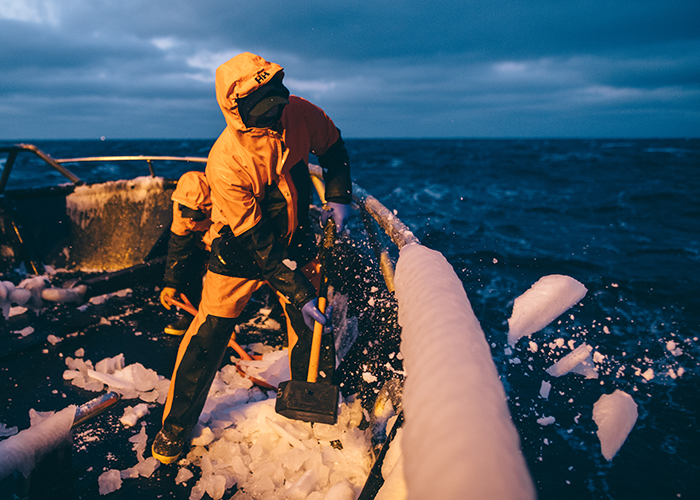 It’s a constant battle against the elements, but as long as you stay ahead of things, the battle can be won. 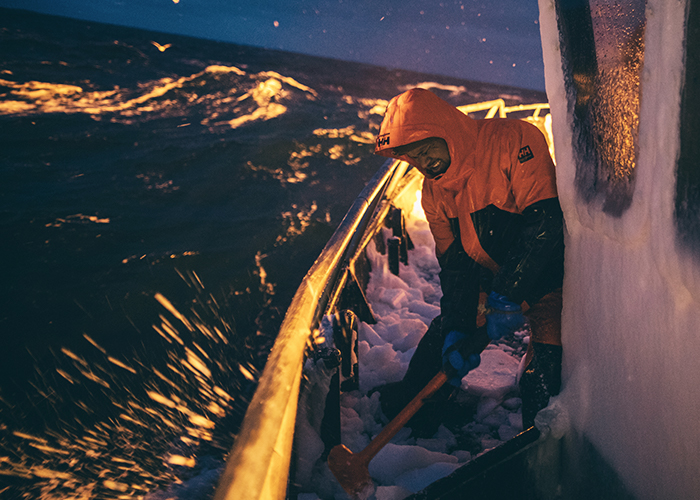 If this picture doesn’t scream “work ethic”, then there probably isn’t a picture in existence that does.

Being able to depend on reliable and functional tools, equipment, and gear is essential to not only the quality of the work, but to the very survival of the crew.

One of those needs is to have quality, trustworthy, and durable waterproof apparel.

It can eliminate a whole load of potential stressors, both physical and mental.

Staying warm and dry is vital. 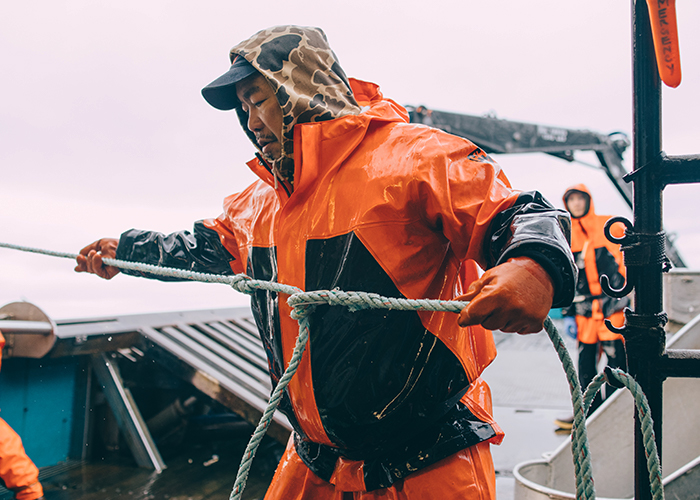 Unpredictable and inclement weather is a given in this industry. Nothing can teach someone what gear they are going to need better than time, personal experience, and the occasional tip from a more seasoned crew member.

When the crew needs to be completely focused on the rigorous, physically-demanding task at hand, for 12-18 hours straight, the last thing they need is to be miserable or sick because of failing apparel and faulty waterproof gear.

These crews need gear that is as tough as them.

Gear that will withstand the beating.

Gear that can stare down the sea. 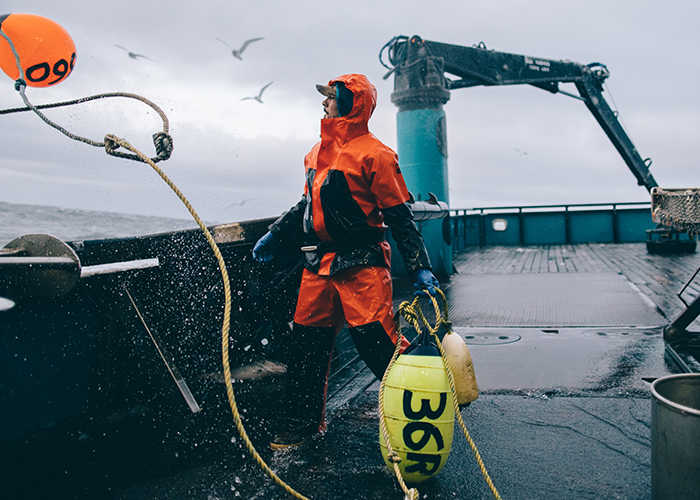 All Images by Andy Cochrane. Video by Adam Wells.